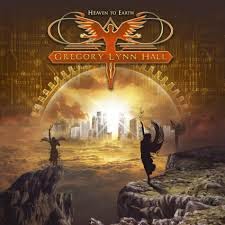 In the early 80's the band Rat Sally was a popular player in the Hollywood scene appearing at clubs like Gazzarri’s and The Troubador.  Gregory Lynn Hall, Rat Sally vocalist, went on to lend his vocal talents to commercial jingles throughout the 90's and formed AOR band 101 South with Roger Scott Craig in 2000.  With a three album 101 South discography under his belt, Hall strikes out on his own for his debut solo recording, Heaven to Earth.  The album could be considered a one man band in many ways as Hall not only takes care of all vocals but also the guitar, bass, drums, keyboards and harmonica!  Gregory Lynn Hall did receive some assistance from other musicians, mostly in the form of guitar solos from the likes of Craig Goldy, Jeff Duncan, Billy Liesegang, Mike Turner and Johnny Navarro as well as Bandit Bellamia (drums).

With a couple of different versions available of the track order, my review copy began with "You Got Me Runnin"" an upbeat 70"s infused bluesy treat.  "Rockin' the Road" continued the decided 70"s rock vein, including some great Jeff Duncan guitar solo work and Hall"s gruff vocals.  Duncan also provides the licks for "Stars in the Night" but then it"s time for Craig Goldy to show his chops in the title track, "Heaven to Earth", one of the clear standouts.  While "I Thought I Saw Heaven" slows things down, "Love Can" explores the more mellow style of AOR rock.  Two back to back ballads follow with "Fly On" and "Ordinary Man" and coupled with the previous two songs equal a total loss of interest at this point.  "Cry No More" returns to the 70"s vibe and groove while "Mama Said" ramps up the blues element largely due to the harmonica use.  Then it's back to a bluesy slower pace for the album closer of "Cryin"" again showcasing the talents of Jeff Duncan.

This album could have been a lot stronger without the ballad four-pack in the mid section.  Aside from that with better than half of the compositions being over five minutes in length and the others more than four minutes, this release contains plenty of 70's vibe/groove rock infused with bluesy, raspy vocals and talented guitar work.
http://www.gregorylynnhall.com/
http://www.gregorylynnhall.com/
Posted by ROCKUNITED.COM at 8:49 PM