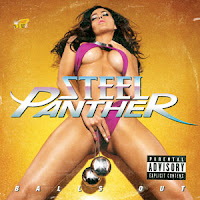 Okay, it’s time to put on your ironic spandex pants and leopard skin headband, as Steel Panther have decided to do a second album - not much of a surprise after the success of the first. As before, the Steel Panther is a confusing beast, peddling mostly childish comedy songs with a style and flair that would have delighted sleaze rock fans of the mid eighties. So are we being homaged or is the piss being royally taken? I’m still not sure…

Perhaps the best fact about Steel Panther is the fact that vocalist Ralph Saenz used to front a Van Halen tribute band and was called Dave Lee Ralph. Now that’s funny. This also means the guy can sing, and as with everyone in Steel Panther there’s certainly no shortage of musical talent. Saenz (who uses the name Michael Starr in the band) can belt out “Supersonic Sex Machine” (a track that Reckless Love would kill for) like a pro, and when you have a lead guitarist with the talents of Russ Parish (“Satchel”) it’s good to see they are being utilized to the full, as “Balls Out” contains some monster riffs and searing solos.

As ever, though, the real debating point of Steel Panther is their longevity. It’s like watching a live comedy DVD - you love it the first time but the jokes don’t get better when you hear them again and again. Steel Panther have an advantage in that the songs are very well written, but in the end they are pretty standard glam metal distinguished by the fact that no one else writes lyrics quite like this. The lyrics are, well, filthy. They are at their best when there’s a bit of cleverness involved, such as single “If You Really Really Love Me” and “Just Like Tiger Woods”. Unfortunately, most of them are incredibly low IQ stuff, like “17 Girls In A Row” or the rather self explanatory “It Won’t Suck Itself”, a track that sounds a lot like Motley Crue at their peak.

So once again I am torn by a Steel Panther album. On one hand, the music really is pretty good, pure 80s Hollywood Strip metal, all hairspray, bandannas and venereal diseases. The other hand has the fact that the lyrics are often embarrassing to listen to, and it really can feel like they’re just making fun of music I love. If that’s true, anyone who buys it is being taken for a fool. Suffice to say, if you loved the debut, this will certainly float your boat, but those who think it’s all a bit silly should go and get the new Vain album for their sleaze needs.