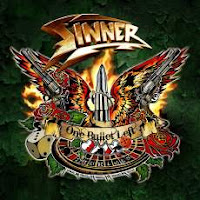 Mat's certainly been quite a busy Sinner over the past years working on projects such as Godless Shiva, Jamison/Kimball, Kiske/Somerville, Scheepers, Voodoo Circle and of course Primal Fear. Sinner is however his first love with a nice background history that dates all the way back to the very early eighties. They were sort of the first wave of teutonic heavy metal which became later everyman's Running Wild, Blind Guardian, Helloween, Rage, etc, etc. I can't recall any Thin Lizzy influences whatsoever on their early records though?

Weird? But, much like previous attempt (Mask Of Sanity), "One Bullet Left" is basically two completely different sides/dogs of hard rock fighting over one album. Teutonic Lizzy? Well, it's still better than those blokes touring as Thin Lizzy nowadays. But to be completely frank, it's just not working out in the long run. The T-Lizzy sounding tracks are basically rip offs and the teutonic metal ones are few and barely enough to please this particular reviewer. Sinner is obviously obsessed by the thought of channeling the sound of Phil Lynnot, but it's hardly the most original idea in the history of hard rock. Final verdict: Too schizo and hardly above average.

Posted by ROCKUNITED.COM at 9:03 PM