SOUL SELLER: "Back To Life" 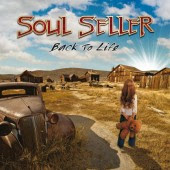 This Italian hard rock band has been around since 1999, and they've even called it quits once, but the passion of the founding members Dave and Mike Zublena didn't go away. So, a couple of years ago they decided to give it another shot, and the result is here for all the world to hear - the album "Back To Life".

With new guys in the band and the services of producer Alessandro Del Vechhio enlisted, the band has come up with a decent melodic rock album. Musically they're standing somewhere between Journey, late eighties' Whitesnake and Bon Jovi of the same era. Especially vocalist Michael Carreta's voice reminds me of young Jon Bon Jovi.

The album starts strongly with the catchy "Wings Of Freedom", followed by the summertime AOR of "Change Your Heart Tonight" and the melancholic "All I Can Promise". The latter has a truly fine chorus.

Despite the guest vocals from Oliver Hartmann, "Keep On Moving" isn't one of my favourites, but it does show a harder side of the band. Hell, is that an Accept riff I hear?!

"Old Hero's Prayer" and the fine ballad "Hell Of Tears" are my favourites among the remaining tracks, but while some of the other tracks do have their moments, they're still somewhat forgettable. Hence the rating, although it was a close call... Not bad at all.

Posted by ROCKUNITED.COM at 8:59 PM