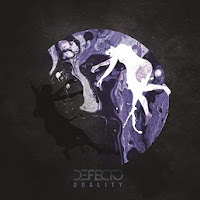 Blimey. This will take you back the odd 15 years. It's high energy and cringe worthy slightly alternative metal from the early 2000's. You know, it's very much the now extremely outdated and no longer popular sound of Hoobastank, Disturbed, Avenged Sevenfold, etc. They are about as original as the footballer covered in tattoos. Hint: They are ALL covered in tattoos. In other words. The multi-layered crusty pastry 'Danish' is originally from Austria/Vienna and not Denmark. They are simply named 'Vienna pastery or bread' in my homeland and not 'Danish' like the fake-copy. Ultravox wrote the song (Vienna) and the very camp 'Wonderful Copenhagen' as performed by some geezer just isn't the same kind of quality and you know it.

The third album from Denmark's Defecto, is very defecto as 'Duality' is some kind of thematic concept album taking inspiration from both "personal and external events, dealing with both the light and dark sides of human existence", according to the press release and info-sheet. Opener "Rings Of Saturn" goes from Avenged Sevenfold to Hoobastank metal (just like that) and it may just actually impress the average listener with its catchy refrain and uptempo mode. It's not too shabby. Several tracks are considerly darker though, including the ever-so-popular semi growls of the early 00's.

Truth be told. The entire Duality album is like a wet blanket music casualty that reflects the band's desire to compose since long-gone alt metal numbers with no real meaning or purpose. There are no actual fun songs to be found on the entire album, everything is diffused and disturbing from the opening number to the closing track. This release is supposedly based on your old heroes and rock/metal music of the past, but that will be little comfort to the poor schmucks who have to listen through all the heard-it-all-before compositions. It's very much a take it or leave it proposition and the majority of tracks would have you madly screaming and running for the hills. Back to the cave. Back to the basic. Back to the drawing board and start all over again.

Posted by Urban Wally Wallstrom (RockUnited.com) at 11:31 AM