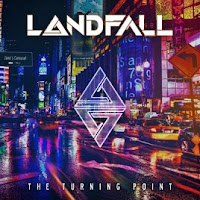 Reading the press release it said that Landfall had in singer Gui Oliver (Auras) the natural successor to Steve Perry and that 'The Turning Point' can be described as falling between classic melodic rock à la Journey with some slightly heavier influences, such as classic era Dokken, White Lion and Extreme. Well colour me not too impressed since it's clearly more like if Perry on a bad hair day (or with the flu), decided to record the solo album where... hang on minute... Perry did record a rather so-so solo album the other year?

Actually. Perhaps it's only me? But on the opening track of "Rush Hour", I can hear and notice just as much of a young Eric Martin (Mr Big) in singer Gui Oliver. It's 'Sucker For A Pretty Face' and 'I'm Only Fooling Myself' rather than Escape or Frontiers. Not quite (geez) as superb as the two legends of melodic rock and killer vocals though. Let's face it. You simply shouldn't start up the info-sheet with words such as "a true deadringer for the legendary Steve Perry of Journey". It will only come back to haunt the poor bugger for the rest of his life. He's not bad but not really 'Perry' and the overall sound of the album doesn't always ring true 'ala Journey for that matter.

In fact. Why the hell are we talking about Perry/Journey? Landfall certainly deserve to be measured on their own merits. Opener "Rush Hour" feature the fun riff (guitarist Marcelo Gelbcke) and it's definitely more hair-metal than pure AOR. "No Way Out" is darn catchy and fun. "Across The Street" bops nicely along to the Harem Scarem influenced melody. Final verdict: The nice but uneven affair, at times storming along like second rate Journey with a bad Perry fixation, at others being choc-a-bloc with hair metal brilliance. In fact. The less AOR it gets, the better it seems to sound. What's the difference between AOR and Hair Metal? About 20 cans of hairspray? LOL! Take this for what it is and give Landfall a chance to stand on their own two, ehh... eight feets. Neat!