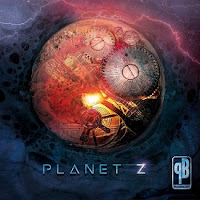 That Panzerballett mastermind guitarist Jan Zehrfeld does not shy away from difficult musical experiments. Unfortunately the exact same statement goes for composing extremely boring instrumental guitar rock fusion music. The absence of a proper structure is clearly a faulty factor, contributing to its relatively disturbing product and final result. In my humble opinion, the style itself is just too hippie, LSD influenced, favouring and combining rhythmic lunacy and compositional shamelessness in one almost unlistenable album.

Why would anyone combine metal and big band jazz in the first place? Why not, you ask? Because it's simply not that interesting and all the vivid breaks, brass, and bar piano moves goes in through one ear and out the other. Unusual drumming (read jazzy fusion free-form stuff), howling saxophones, fast and snappy tempos, quirkiness and abundant guitar work, resulting in a confusing although fascinating effort with more diversity than guitarist are often given credit for.

One minute, I like the overall idea and concept, the next, I absolutely hate it! On tracks such as "Coconut" or "No One Is Flying The Plane" either the arrangements are so darn obscure that they're impossible to fully decipher or Pazerballet are simply recording their own doodgy version of Avant-Garde in an desperate attempt to be take seriously by old fart journolists and posh upper white class. The shocking fun Brutal-Metal version of "Walkurenritt" aka "Ride of the Valkyries" by Richard Wagner is however the real talking point and highlight of the album. We all enjoy the smell of napalm in the morning? Yes? No? Final verdict: Oh... I believe I'd rather play me some Satriani...