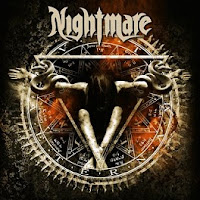 Studio album #11 (really? who's counting?) sees Nightmare back, unbowed, unbreakable and inspired, ready to take the music to a whole new level. The band returns with the hugely talented female vocalist Madie (Faith In Agony) behind the microphone and has recorded the most ambitious album to date, "Aeternam". Now, I haven't been listening to all eleven albums by the French metal act. Merely a couple or three of them to be honest and I'm definitely okay with that. It's a mixed bag of tracks drawing on Thrash, old School Heavy Metal and symphonic rock, "Aeternam" is an album lacking spark and basically anything remotely memorable. The songs are all the same, based around the basic template and structure which quickly becomes the long deja vu experience and 'been there, done that'.

Heavier and more raucous than some of their previous offerings, with the most fun melodies of yesteryear been thrown out of the band, the first half of the album is ever so gloomy and dull. "Crystal Lake" picks up the pace, not really, but it's a decent effort. The real star of the album though and worthy all the praise would have to be the new vocalist, ehh... Madie? Much like Madonna or Beyonce, she's the one-name kind of character with a great set of pipes. The second half of the album and things get all loose and disjointed again and the band seems to think that repeating the first half compositions will be enough to see it through. It clearly isn't. It's back to the drawing board for the French Nightmare... sacrebleu!