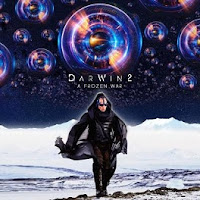 Progressive Rock and concept albums have come and gone in many different shapes and sizes over the past five decades. Even just looking at The Who and their dense start of Tommy to all the massive projects of the golden era of the seventies and the more metal-ish output of Dream Theater. It's always been about pushing the boundaries and looking outside the box while their minds and compositional skills run bezerk in the studio. In the case of "Darwin 2: A Frozen War", almost no aspect of the creative process was typical with team members spread out around the world and often under lock down. This second album builds on the previous idea and concept of Origin of Species and they certainly went bezerk on their instruments.

It's overall the very melodic project where you can find bits and pieces of everything from Extreme, Robby Valentine - to Spock's Beard (Neal Morse), King's X, Rush (especially their mid/late 80's albums). DarWin is no doubt highly influenced as a guitarist by Nuno Bettencourt, Steve Vai, and Joe Satriani. The hard rock virtuoso shredding goes hand in hand with grand orchestral structure (including Reykjavik String Quartet), layered vocals 'ala Spock's Beard, Extreme and King's X, soaring harmonies 'ala Kansas and catchy choruses. With songs like "Nightmare of My Dreams", "Future History" and "A Frozen War" showing that they are also not afraid of experimenting with sound and arrangement, this comes across as an highly interesting and mesmerising album. If you usually find prog-rock invert and not melodic or catchy enough, have a go at this platter and you'll quickly produce an excessive amount of drool and saliva. Highly Recommended!