PERFECT PLAN: "Time For a Miracle" 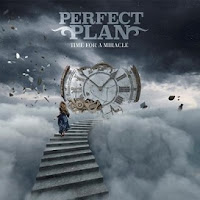 The bells are ringing and the lads are singing - 'When the war comes closer and the fight is all we got. It's time that we know it's time. It's Time For a Miracle' Bloody'ell. I believe they are saying it's TIME? The band's second album finds them in excellent form with undoubtedly the best pure 80's AOR release of the year so far. The Swedish lads has captured a lot of the dud-dut and stabbing keyboards from Jimi Jamison-era Survivor, Foreigner, Giant, Signal, and Scandinavian AOR (Alien, Europe) with a personal magical touch and feel.

The band features the superb singer Kent Hilli together with Rolf Nordström on guitar, Fredrik Forsberg on drums, Leif Ehlin on keyboards, and new bassist Mats Byström. The latter used to play with Ehlin in the band Desert Rain (Bang Bang/1991) and are now once again reunited. Catchy and hooky to the last, Perfect Plan piledrive their way through the now familiar pure AOR territory, from the opening title track to closer, "Don't Leave Me Here Alone". And the cleanest production ever from this particular label lifts the material to the highest high. The bluesy Europe-styled, "Nobody's Fool", a darn nice breather from the shock-value AOR and something different from the rest of the compositions. Nicely done!

The other compositions have a lovely tendency to slowly creep up on you from behind and smoother you with keyboards and killer vocals. Best of all. Perfect Plan are serious about their music-al agenda and beliefs. It's not some kind of parody act or the half-arsed effort. They're not making a mockery of a bygone era. They're not trying to be AOR - they truly are AOR right down to their shoe-laces! It's all or nothing. Final verdict: This is simply just a marvellous example of U.S. Rock crossing over to Scandi-Rock to form one helluva alliance and union. For those about to AOR - we salute you! Highly Recommended!