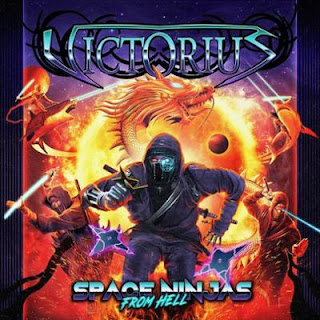 Oh my... oh my, oh my. Space Ninjas From Hell??? Ouch. Serious headache and the flashback attack from the Amiga days and playing various crap games on a crap computer. Evil ninjas from outer space are on their way to take the world by storm and Victorius made the soundtrack for this glorious happening? Be prepared for 13 silly anthems about ninjas and samurai warriors, mixed with knowledge from silly kung fu movies? It would be fun if not for the German/Teutonic over the top Power Metal musicians and their really dodgy attempt at composing from mainly the weird and strange influences of Japanese culture and language.

I'm actually both stunned and confused by the lederhosen boys and song titles such as Super Sonic Samurai, Evil Wizard Wushu Master, Nippon Knights, Shuriken Showdown, Wasabi Warmachine, Shinobi Strike 3000. etc. Are you supposed to laugh or cry? Then again, it's hardly surprising considering the history of Germany. Don't mention the war!! See my point??? It's no fun to be merely reduced to stereotypes. Victorius have got some nice ideas musically and the actual musicians are all fine, but there's definitely work ahead in the lyrical concept departement. But hey... If you fancy The German mock version of traditional Japan, don't let me stop you. Like the leader of the lederhosen boyos said, sharpen your laser katana and brace yourselves for the great cosmic ninja war! Sigh...
Posted by Urban Wally Wallstrom (RockUnited.com) at 11:25 AM