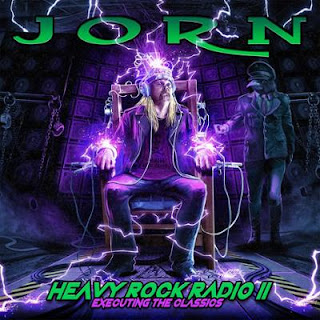 Jorn Again? Hallelujah. Sisters and brothers. It's the return of the Heavy Rock Radio and covers' on repeat. Oh the horror, the horror. Hang on... there's a mansize crow or magpie on the cover and Jorn's stuck in the electric chair? Things are getting better by the minute. Every song Jørn covers is treated with the utmost respect thoughand "Jørn-ized" accordingly, just like the first album where fans showed a lot of enthusiasm and interest for those versions, so a follow-up covers album seemed like a no-brainer. They did? Show enthusiasm? Executing The Classics? Does the world really need another dodgy version of 'Quinn The Eskimo' (The Mighty Quinn) as in originally performed by Bobby 'Ewing' Dylan. Needles And Pins? Definitely. It's all needles and pins.

'New York Minute' as in Don Henley (Eagles) is however a g-r-e-a-t choice and a very underrated song in my opinion. One of those late 80's tunes that deserve a lot more attention and praise in this time and era. Jorn's version is slightly heavier and darn excellent I may add. It's just such a great song from the start. 'Winning' (Russ Ballard) is another interesting choice and you simply can't go wrong with the starightforward rock of Bryan Adams and 'Lonely Nights'. They've actually added bagpipes to the 1976 tune of Winning, but it's not as weird as it may sound? It's very John Farnham somehow even if there's no real bagpipes on his super hit, You're The Voice.

Final verdict: One of his better covers records and I'm still digging the version of Naked City (KISS) from Heavy Rock Radio I, one of the bonus tracks on this release.
Posted by Urban Wally Wallstrom (RockUnited.com) at 11:30 AM