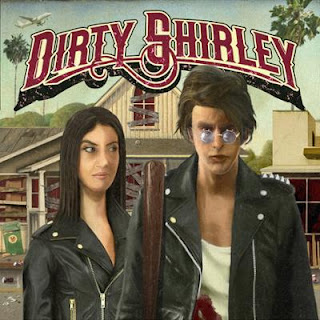 Dodgy moniker, check. Dodgy album artwork inspired by American Gothic, check. Dodgy music... no, check this out!!! I don't know who this Dirty Shirley is but she's obviously a rocker. It's actually yet another project put together by six-string bender George Lynch (Dokken, Lynch Mob, etc) and described as blues infused hard rock featuring the cold wicked touch of Mr Scary. The warm touch and excellent pipes by Croatian singer Dino Jelusick (Animal Drive) is however the real starting point of the album. He's clearly the best Dio vs. Coverdale vs. Gillan voice since... well... Jorn of course (see review elsewhere).

The overall sound is based around the 70's blues hard rock records. However. There's also r&b, ballads, a couple of heavy tunes, and some grungy vibes. Something like, "Last Man Standing", could just as easily have been leftover from the Coverdale/Page project. According to Lynch, "80% of the guitar work on this record is rhythms, so I wanted to create a three-dimensional sonic tapestry that complimented the more basic riffs and chords. I tried to add a little twist to everything". His style and wicked tone is something out of the ordinary as always and you really can't complain on the guitar work. "Siren Song" is probably the best song on the record and it simply reeks of Coverdale/Purple. "The Voice Of A Soul" goes through all the different stages of Coverdale and Hughes.

I'm sure Dirty Shirely will cause quite a stir in the groovy hard rock circles over the next months or years, depending on if this is the one-off project?Unfortunately, not all the glitter is gold. A couple of fake nuggets inbetween the goodies and this is where the typical Lynch sound kicks in with the mid/late 90s styled rock. Remove them and you'll end up with a winning combination and concept though. facebook.com/DirtyShirleyRock
Posted by Urban Wally Wallstrom (RockUnited.com) at 11:39 AM