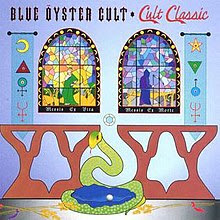 "All our times have come. Here, but not there, gone. Seasons Don't Fear The Reaper. Nor do the wind, the sun or the rain". Indeed. There's one helluva lotta' la,la,la,la,la's next and it's all very cozy and the timeless classic rock moment. They obviously wrote the tune while smoking a fatty and listening to America (the band, not the continent) and their massive hits of 'A Horse With No Name' and 'Ventura Highway'. Yes? No? Whatever. Simpy add more electric guitars and it's Blue Öyster Cult. Keep it under your hats though. It's explosive stuff. The great album Agents Of Fortune from 1976 doesn't exactly pre-date the America debut. On the downside, the cowbell is buried low in the mix on this re-recorded, remastered version and we always need more cowbells on this track... :-)

"All praise to Balthazar. He's found the awful truth. He's found the saucer news". You have songs about extraterrestrial intelligence. Bombers in the sky, the summer of love (not!), burning, O.D.'d on life, the secret of telepaths, megasize monsters from Japan, skywatching, cities on fire, the eyeman of TV, and even the odd boogie. What's not to like? It's all very much the seventies sound though and Cult Classic may not surprise any fan of the genre.

To be perfectly honest. The album was originally released in 1994 and containing remakes of many of the band's songs. The same recording was re-issued by other labels under the titles Champions of Rock and E.T.I. Revisited in 1998 and 2004, every time with different artwork. Now it's Frontiers turn and some of these tracks are just too bland for my personal taste. It may have been the s**t for U.S. people in the 70's, but remember, they also thought of Ted Nugent as the Rock n Roll God? Christ on a bike. They both have one thing in common though. One superb classic rock tune. Nah. I definitely prefer BOC and they have Burning For You!!! The nice beginners' compilation album.
Posted by Urban Wally Wallstrom (RockUnited.com) at 11:37 AM