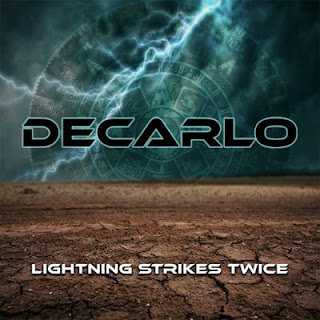 Tommy DeCarlo has been the singer of Boston since 2007, and featuring son Tommy DeCarlo, Jr. on guitars, their debut album effort is deeply rooted in family friendly music and keeping it safe for all the little kiddies. Do not expect any swearing and there's certainly no need for any parental advisory sticker with explicit content. OK. That's enough of banter. It's however the truth though as this is a very old fashioned AOR platter where the message is and I quote, "Do we have to hurt each other? To all my sister and brothers - We need to Give Love A Try". Good on ya'. There's enough of hate, haters, and Trumps in this world.

It actually soft-rock music steeped in the laidback, feel-good, tradition of REO Speedwagon, Dakota, Petra (Greg X Volz era), 38 Special, and a little bit of Boston (of course?). Opening the album with the Country influnced "A Better Day" is something to get used to before the band strip the sound down to the bare bones of AOR on "You Are The Fire" which devolps into the honest approach and statement from the DeCarlo family. The band originated in Charlotte, North Carolina and sees the two Tommy DeCarlo's collaborate with drummer Dan Hitz and bassist Brett Nelson. The band has toured in many US states and has recently played at the Frontiers Rock Festival in Milan, Italy at the kick off acoustic night.

There's a distinct old fashioned edge to the melodies and the album may lack some of the bite and hooks of the mid/late 80's/early 90's era. This is rather the late 70's/very early 80's sound and it may not always please the critics of this particular site. It's however still pretty catchy and something like, "Give Love A Try" that features a wicked drum pattern by Hitz, should please any fan of early 80's melodic rock with a touch of Asia (the band). The instrumental "Into The Storm" works as a nice intro to the uplifting title track which basically reeks of Dakota and 38 Special. The piano ballad of "Still In Love" goes through several sections of soft-rock and it's very much the 10cc concept of keeping it real and in harmony with nature and voices.

A title such as "Rock N Soul" should put ya' in the mood, get ya' feelin' right. There's even a saxophone on this track and again, think late 70's rock. "There She Goes" isn't a cover of The LA's excellent anthem from the late 80's. But a rather catchy original that goes straight to the heart. "Stand Up", a typical early Petrafied track that goes sadly nowhere. "The One", the piano ballad in the style and tradition of REO Speedwagon. Final verdict: It's a a rather innocent, feel-good platter in the style and era of approx 1979 to 1982. Great vocals and musicianship and it's one of those albums that got better with each spin (up to a certain point of course). facebook.com/DECARLOROCKS
Posted by Urban Wally Wallstrom (RockUnited.com) at 11:41 AM