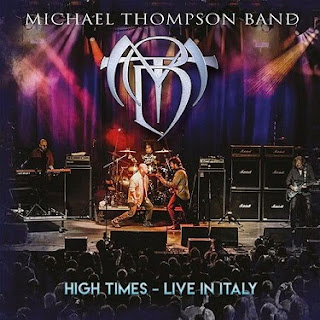 Hands up if you ever gave up hope of the Michael Thompson Band double live CD and DVD release ever seeing the light of day, or dark of night for that matter. Ehem. Okay. Keep waving those hands in the air if you've never heard about Michael Thompson? Yeah. That's what I thought. Under the radar but never forgotten at RockUnited.com since we're extremely nerdy at digging up all the rockers of the past. Simply check our massive archive for all the Michael Thompson information. U.S. LA session guitarist gone haywire and here's the rather ambitious live project recorded in Italy with the following musicians: Larry King (vocals), M.T. (guitars), Larry Antonino (bass) and the keyboard Guy named Allison are both Unruly Child(ren), etc.

This is a showcase of experienced musicians with plenty of know-how and not quite as much pace or energy on stage. They hardly move or do basically anything beside standing still on the spot and singing/playing their hearts out. It's like watching your gramps' on dope and that's at least some kind of entertainment, I guess? Kidding aside. Do not expect any dance moves or movement whatsoever. The concert given to an less than enthusiastic audience in Italy and Frontiers inhouse place (the Live Music Club in Milan) was indeed recorded both on CD and DVD. They have the same running order and there's no real bonus material or hidden stuff. I couldn't find any? Perhaps it's still bloody hidden?

'Good evening' (no real response) 'You guys suck' - maybe not the best way to start up the audience but Larry's trying and he's obviously kidding. The response gets better and there's even praise from the crowd. The sound is of decent high quality and there's a nice mix of distance shots and close-ups of all the geezers plus some extra shots at the awakening audience. They're warming up to the music and what's not to enjoy about the likes of "Can't Miss", "Secret Information" and "Save Yourself". Everybody's talking about "Give Love a Change", but I'm not a big fan of that particular tune. The guitar work and solo is however top class. Merely 9 tracks and the last one is a friggin' cover? Why? We want Michael Thompson material, not another snooze version of More Than A Zzzzz... Feeling (Boston). Final verdict: Great musicians. But still perhaps not the best of live outings by the Frontiers. facebook.com/MichaelThompsonBand
Posted by Urban Wally Wallstrom (RockUnited.com) at 11:34 AM