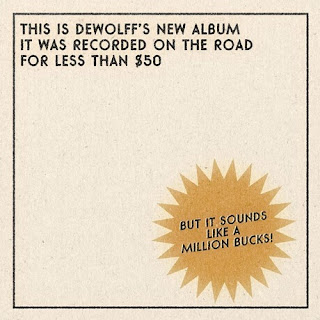 "Trouble, trouble, trouble". It's the Tascam Tapes. This is DeWolff's new album, it was recorded on the road for less than $50, but it sounds like a million bucks. A Million? Why not billion or trillion? Some of you may remember the band when they only recorded $30 albums, but they have clearly moved on to the fancy and posh enstablishment. The average rock fan isn't too bothered about your albums' cost to be honest since they're still paying the same price in the record store... ehh, except there's no store anymore? And people don't actually pay for records rather than individual songs? What the fudge? There goes the old Tascam 4 Track Cassette tape recorder (which always broke anyhow according to the band) down the river.

It's definitely old school recording but not always old school blues since DeWolff's are mixing things up with a little bit of electronica and dist to the max. No drum kit, no Hammond and no guitar amps though. The two part story of 'Blood Meridian' goes through several stages of genres and styles and I kind of like it. It will most certainly appeal to the devotees of open minded blues and R&B. "Love Is Such A Waste", featuring a 'Crazy' sampling and quirky arrangement which could almost have you thinking about a certain 'Crazy' hit from the 2000's.

The soulful display of tracks such as "It Ain't Easy", "Rain" and "Let It Fly" goes straight back to the future with its timeless sound. DeWolff are at their best when the playing is kept a bit quirky (see, 'Am I Losing My Mind'). When they enter some of the more basic blues sections the production and the very limitied budget (what budget?) do shine the most though. Final verdict: Quirky and darn interesting, it's probably worthy of $55 and then some.
Posted by Urban Wally Wallstrom (RockUnited.com) at 12:09 PM