THE MURDER OF MY SWEET: ”Beth Out Of Hell” 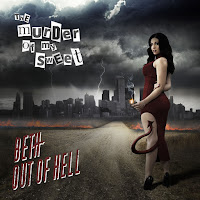 Female-fronted, symphonic, bombastic… who does that make you think of? Nightwish? Within Temptation? One of the answers to that is The Murder Of My Sweet, who have managed to create an identity of their own. Yeah, the music of TMOMS could very well appeal to the fans of the both aforementioned bands, but copycats they are not. First of all, Angelica Rylin has a very powerful rock voice with very little operatic traits. Secondly, the songs of Daniel Flores are something special, as if they were tailor-made for a stage performance, a hard rock musical or a metal opera. I can’t imagine these songs being played at some small club, They’re just way too ”big”… It has to be a theatre-sized setting with lights, smoke, choirs and massive screens. Well, at least something like that.

The concept of ”Beth Out Of Hell” is the ancient battle between good and evil, heaven and hell… it is also a dramatic love story. No more spoilers from me, you’ll have to listen to it yourself. This much I will spoil though - you’ll hear some of the finest songs of this year on the album. Some of them sound like Jim Steinman-written symphonic metal, and indeed the album title might be a tribute to Steinman’s classic work ”Bat Out Of Hell”.

To simply call this Symphonic Metal or Progressive Metal wouldn’t do justice to these songs. There’s huge amounts of pop sensibility in them. Those Swedes, they just can’t get away from the influence of Abba… and that’s a good thing!

”Always The Fugitive”, ”Still”, ”The Awakening” and ”Humble Servant” are among my favorite tracks, all boasting huge choruses and bombastic arrangements. Had the band been able to stay on this level throughout the album, I wouldn’t have hesitated to give this album the full marks. Unfortunately there’s a  few songs towards the end of the album which really don’t do it for me, hence only an RRRR rating.

Posted by ROCKUNITED.COM at 6:51 AM