SERGEANT STEEL: ”Riders Of The Worm” 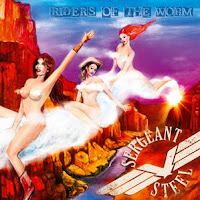 Sergeant Steel are an Austrian hard rock band and ”Riders Of The Worm” is their third album., they’ve managed to get a legend to produce their album - Michael Wagener. Back in the mid-to-late eighties, Wagener produced some of my all-time favorite albums: ”Pride” by White Lion, ”Fireworks” and ”Point Blank” by Bonfire, ”Under Lock And Key” by Dokken… His recent work hasn’t reached the same heights, but when I noticed that he’s the producer of this album, I got curious. Could this be another classic? Well… With Wagener in control, the album sounds really good, but the songs aren’t on the same level as the production. Let’s take a closer look…

Opener ”Happy Time (Love On Demand)” is frankly a rather silly track with a chorus that’s hammered to your head whether you like it or not. ”Short time, long time, happy time, c’mon love me on demand”…  Vocalist Phil Vanderkill’s Axl Rose-like wailing doesn’t win the band any extra points from me. ”Dirty Habits” is the band’s video song and it’s a straight-forward rocker in the vein of AC/DC or Krokus, not too bad actually. ”Silver Spoon” features a guest appearance by Kane Roberts on guitar and a more melodic approach. The main keyboard/guitar riff that carries the song is one of the tried and tested ones you’ve heard a few times before, but this is still one of the better songs on the album.

”Where My Heart Is” the obligatory ballad that borrows a little from Bon Jovi’s ”Always”, while ”Young And Hungry” has bit of a country/southern rock twang in it and Mark Slaughter guesting. The chorus I’ve heard before for sure. Maybe in a song called ”Down And Dirty” or something? ”Only Good Girls (Love A Rock’n Roll Boy)” is a throwaway boogie rock song with Vanderkill shirking like Axl again. ”Hot Widow” might be my favorite song of the album, it moves like a freight train and the chorus is cool. Can’t say the same for ”Mr. Right”, it’s attempting to be a song with a big dose of swagger but ends up just being somewhat clumsy. ”Can’t Take My Hands” is slightly better as is ”Rock’n Roll Highway”, both ok melodic hard rock songs.

What’s left? ”Samsara”, an instrumental interlude, the acoustic ballad ”Promised Land” which is decent enough and ”Trouble Maker”, a mid-tempo stomper that doesn’t do much for me. Oh yeah, then there’s the CD-only bonus track, ”Dirty Habits (Bling-Bling-ReMIX)”. The only good thing about it is the fact that it only lasts less than a minute. Had it been any longer, I might have taken off one of the R’s in the rating!

Posted by ROCKUNITED.COM at 8:48 AM