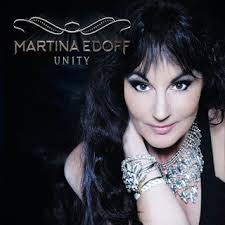 If you haven’t heard of Martina Edoff, you can join the club. When the CD dropped out of the envelope I didn’t know quite what to expect, especially after I saw she was a vocalist in the likes of Ace Of Base and Dr Alban, not exactly rocktastic acts. Her debut album last year passed me by completely, but as soon as I fired up this one I immediately wanted to track it down, because ‘Unity’ is exactly what you want in a melodic hard rock album.

Comparisons will be made between Martina and the likes of Issa and Fiona, and I have to say that’s completely fair. Ballsy, well sung hook laden melodic rock is certainly a linking theme with these three artists, but it’s the quality that makes them stand out from the chasing pack. Vocally, Martina has a clear, powerful voice that hits all sorts of perfect notes and wails when wailing is needed. For the most part the songs are strong kick ass powerful melodic rock – check out the promo for ‘World Has Gone Mad’ for a fine example of what to expect. There’s also a couple of songs that take a lighter approach - the Roxette-ish ‘Moment Of Truth’ of the catchy ‘Spirit Of Love’, but to be honest they’re still very well written tracks with great hooks. My personal favourite track is ‘Come Alive’, which is a stupidly catchy rabble rouser of a track that fills the air with vitality.

Martina Edoff, with a little help from fellow Swedes H.E.A.T, has constructed a first class piece of melodic rock with ‘Unity’. It doesn’t reinvent anything, or stretch any musical boundaries, but contains the sort of music that reminds you just why we still get off on big guitars and hook laden melodies. So all you fans of Issa, Chrissy Steele, Fiona and the like, you really need to pick this beauty up.