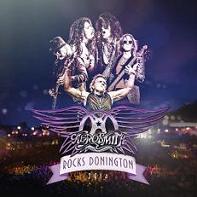 The quick backstage view and we're off to the stage. Headlining the massive Download festival at Donington Park 2014, a site where the band last played in 1990 at the classic Monster Of Rock, when they were joined by a certain Jimmy Page of Led Zeppelin. This time around, there's no special guests, nothing extra whatsoever. No bonus material, interviews, or background history. Merely the live concert on DVD/Blu-Ray and five Boston geezers doing the Same Old Song And Dance. They're still rocking though.

I still don't know why they insist on playing Train Kept-A-Rollin? If there's ever been a dull moment. The toxic twins are looking dead on their legs as we quickly fast forward to the Aerosmith classics of Eat The Rich and Love In A Elevator. Tons of flashy moves and camera views that will literally have you flying across the stage and all around the musicians, capturing the huge gathering of people (that's audience) and the atmosphere of the evening. Actually. Looking through the set list, there's quite a lot of 80's, 90's, and 2000' and not nearly as much 70's material as expected. Suits me fine as I prefer latter era Aerosmith, starting with their comeback album in the mid eighties.

A couple of dodgy moments such as Joe Perry taking a turn in the spotlight singing lead and playing Freedom Fighter from the 2012 album Music from Another Dimension. Proof that some vocalists are better than others, and some guitarists should stay far away from the mike. The biggest sing-a-long moment of the gig? The Diane Warren number of "I Don't Want To Miss A Thing". They enjoyed disaster movies in the U.K.? The ode to Vince Neil (Dude Looks Like A lady) goes down well along with the cool version of Come Together (The Beatles). Not to mention the encore numbers of Dream On, Sweet Emotion, and Mama Kin. Pros are plenty. Cons: ancient old geezers shouldn't be running around on stage screaming great tits to their female fans. Definitely stuck in the 70's.

Posted by ROCKUNITED.COM at 6:24 PM