THE TREATMENT: "Running With The Dogs" 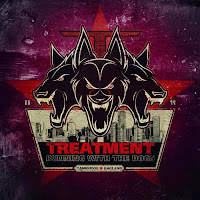 The UK’s The Treatment issued their sophomore effort earlier in February, Running With the Dogs as a two CD deluxe edition. The first disc contains thirteen new tracks while the second is comprised of cover versions of some of the bands that have heavily influenced The Treatment.

Rarely, if ever does the sequel compare to the original (with the exception of The Empire Strikes Back) and that is certainly the case with this album. There are some points that do the debut proud, like “I Bleed Rock & Roll”, “Don’t Look Down”, “Drop Like A Stone” and “Don’t Get Mad Get Evil” but just not quite on the same level as the compositions on the initial offering. The whole album seems to be lacking the swagger and pompous energy of youth that the This Might Hurt record exuded. “Outlaw” is undoubtedly the top of the heap here while “Get the Party On” and “World On Fire” are familiar as they were played on tour with Motley Crue/KISS in 2012. Tracks like “She’s Too Much” and “Emergency” are mediocre filler and easily forgettable. “Cloud Across the Sun” tries to sound like the Beatles, but falls desperately short of the mark and the ballad “Unchain the World” is not much more than a deplorable tragedy. The Treatment should stop trying to show their tenderness and get back to the balls out, wild untamed rock that served them so well on the initial release.

CD #2 contains a nod to some of the influences on the band with The Who’s “The Seeker”, Dr. Feelgood’s “She Does It Right”, Badfinger’s “No Matter What” and Status Quo’s “In My Chair”. The final two tracks of the six song bonus CD are acoustic versions of “Running with the Dogs” and I Bleed Rock & Roll”

If The Treatment had instead made one album containing ten or eleven tracks comprised of the best of both of these CD’s it might have fared as a better listen. Not bad overall, but for your first foray into The Treatment I recommend that you stick with This Might Hurt.
Facebook