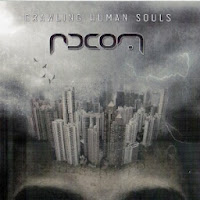 It didn't look that bad. Sure, the album artwork is quite bleak and depressing and the album title doesn't exactly shout "an uplifting musical experience ahead", but at least the band's logo wasn't completely unintelligible in the usual death metal style. I still couldn't figure out the band's name, but only because of the sci-fi styled, strange font. "hmm... could be some sort of hi-tech prog metal" was my initial thought. And then I inserted the cd to the player.

I just don't get it. Over the years, we've recieved dozens of death/extreme metal CD's, yet I don't think we've given any of them good ratings. Still, just about every day we get a request to download the latest CoreMetalDeathBlack sensation... and we ignore them, because it's not our thing at all. But when someone actually sends us a CD, we feel obligated to at least give it a spin. To be honest, most of the completely unsuitable albums will not be reviewed, but now I'm making an exception... I don't know why, but what the hell.

If I didn't know better, I'd say that the band has two singers. One of the could be called a mutant called Gorgorlogoo and the other Phyllis, the wicked witch. Gorgorlogoo has a low, growling voice while Phyllis sounds like, well, the wicked witch, a 175-year old woman with a serious chip on her shoulders. In fact, Gorgorlogoo and Phyllis are apparently one person, the band's uniquely talented vocalist Leonardo Corinadesi. Whether he can also sing cannot be determined by listening to this album. He sure can growl and do the cookie monster thing, so he is talented, no doubt about it. This particular style of vocalizing isn't something I understand, so let's move on to other things... Musically the band is highly competent. The rhythm section does all kinds of complicated things, while the guitarists throw in tons of tricky riffs and solos. There's a fair amount of moody keyboards too. As the instrumental "Echoes Of Void" proves, the band is capable of creating moody and even beautiful music, but it's only a one-off. The songs with vocals may have some interesting things going on in the background, but the growling, screaming and hissing pretty much overshadows them.

The lyrics are in the booklet, which is a good thing because you wouldn't be able to figure out them otherwise. The Phyllis-vocals are somewhat better in that aspect, but Gorgorlogoo-vocals could just as well be all gibberish.

The rating? "G". As in Gorgorlogoo.