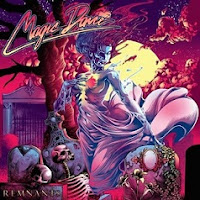 "Oh No" - track number one off the album and also at first the one word review (don't worry it's getting better). "Remnants" is the strange concept album that moves from dark to light. It's about accepting your own mortality and the inevitability of death. But, this realization can give you the drive to live life true to yourself, if you only let it. Magic Dance was originally the solo project of singer/songwriter Jon Siejka, formed in Long Island, NY in 2012 as an outlet for his synthwave songs. However, they've decided to take one small step away from the retro eighties sound and gone for a slightly more contemporary rock/pop sound, production, and structure.

The opening two, three, tracks are actually the least enjoyable ones. Not because they're not rather catchy, but sounding like all the early 00's acts. "Zombie Breath Surprise", the more enjoyable track though and numbers such as "Cut Me Deep" and "When Your World Comes Down" sounds like they been inspired by the likes of Amaranthe and Anberlin. Catchy, but there's as of yet asolutely nothing on here that could pass for AOR though and we don't quite get the press-release blur of 'leaning more towards classic AOR'. That's however not an issue or the problem whatsoever since I enjoy all sorts of music from Pop to Thrash Metal, funk, R&B, punk, prog, etc. "Change Your Life" is in all honestly closer to the sound of The Weeknd than HEAT, but that's cool, since it's a catchy tune and Wekend and his Max Martin arrangements are straight out of the neon eighties.

"I'm Still Holding On", probably the most AOR-sounding track on the record so far and it's absolutely drenched in synth rock and swirling keyboards. There's a lonely saxophone crying in the distant and it's all very cozy and dreamy. What's next? Bazinga! A loud guitar and the more straight-ahead rock arrangements of "Changes" and "Restless Nights" are saving grace at the nick of time. This is fun and catchy, and the latter speak of wasted youth and not lost until found? The Howard Jones inspired intro of "Til Your Last Breath" is very retro/modern and extremely catchy/great. It's one third each of Dua Lipa, AOR, and 80s Synth Pop. Saving the best for last? The closing number of "I Can't Be The Only One" is very much like if The Weeknd decided to drive a flashy car and simply cruise around the streets of GTA Vice City. Final Verdict: I really can't complain too much about "Remnants" after all in the end. You can't deny its catchiness and Siejka is no doubt the classy songwriter. You need to spin this several times as you'll constantly discover something new and interesting to rave about. Hook filled synth/rock/ featuring zombies and retro/modern compositions. "Oh No" - it's darn good and it's magic dance music?! Santa never saw it coming... Magic Dance at Facebook