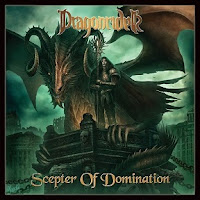 Album cover as well as the artwork of the year? That's if you're into RPG, Dungeons & Dragons, and various stories in the vivid genre of fantasy. Me thinks they've been playing a lot of Elder Scrolls and especially Skyrim just prior to recording the metal opus of "Scepter Of Domination". It's Tolkien Metal in the hands of Amman, Jordan, born guitarist/drummer Rad McDadi based in Bremen/Germany since the mid-10's. Dragonrider fall very much into the same Power/Fantasy/Metal with guts field that comes complete with galloping horses (and tempo) and clanging swords on the battlefield. However, they do not possess an equal degree of finess and force, which is one of the things holding them back. Other things would be the lack of memorable choruses as they're often caught up inbetween meat and potato and pasta de lux. "Where Lightning Forever Strikes" bodes well with its tempo furioso and hot metal flashes of dynamism. Unfortunately, what hopes I have of the Dragonriders' are sadly gone as "The Berserker" goes completely off the rail, and head off into the wilderness never to be seen and heard of again. There's plenty of gore encrusted numbers for your harderned Power/Fantasy/Metal to shout along to here, but we can't help thinking that we've heard it all before and better performed for that matter. The high pitched vocals over galloping riffs that go nowhere fast and it's hardly as interesting as the cover may at first suggest. Final Verdict: Decent first effort, let's hope for the second coming.
Posted by Urban Wally Wallstrom (RockUnited.com) at 3:17 PM