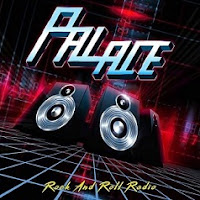 Welcome to Rock and Roll Radio and Welcome to GTA Vice City? The vast Palace stretching from the beach to the swamps and the gitz to the ghetto, an album briming with delights and degradation? Album #3 from the Swede and I kept feeling like I was listening to a certain soundtrack album and I can't begin to tell you how many hours I spent driving up and down the streets of Vice City with the in-game radio blasting on full volume. Crusing down Ocean Drive is a serious night out in the game and you'll notice the strip's neon hotels and bars full of models, actors, tourists, dealers, millionaires. etc.

Vocalist and multi-instrumentalist Michael Palace take a lot of inspiration from the radio stations in the game and of course other sources of the 80s culture and music, fashion, cars, hairdos. Not particularly sinister, "Rock and Roll Radio" owes more to the Swedes collection of pure AOR and Westcoast Rock than to any other form of music. Chockfull of summer breeze and overall very catchy cheeze, it ain't exactly always original stuff, but the hooks are razor sharp and you can't help feeling like a winner at the end of album. Palace said it better and I quote, "When writing stuff for PALACE I'm always looking for that feeling you get at the end of a Rocky movie (spoiler alert), when he wins and the theme song kicks in", end quote from the interview at RockUnited.com

The title track opens up the album with a jump start and it's all great. "Castaway" goes through several different passages and changes as it's a mix of keyboard driven AOR with the hint of Go West and Nik Kershaw. "Way Up Here", bouncy, extremely catchy, and singing lead guitar work. "Cold Ones", chanting, haunting, AOR 'ala Survivor meet keyboard drenched westcoast and there's even the short saxophone solo 'ala Boy Meets Girl. "Eleonora" sporting a STARSHIP t-shirt and waving hello to that 'Nothing's Gonna Stop Us Now' empowered sound and power-ballad only as performed by Palace. "Hot Steel" owes quite a lot to the trio of Dan Huff, Mike Slamer, Kip Winger, since it's one third each to be found on this excellent track. Extra kudos to the lyrical line: 'turbo laser beam', lol. "She's So Original", not to be confused with Cyndi Lauper as she's unusual, pays major tribute to Harem Scarem while riding on the modern wave of new-old music. Final Verdict: Never judge a book or in this case album by its cover. Simply have Santa to put this under the tree and spend Xmas in the spirit of AOR. Ho! Ho! Ho! Palace at Facebook