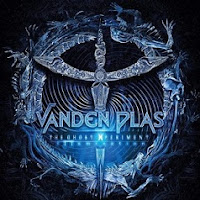 Part two and final chapter in the excellent concept series of progressive metal Ghosts. Part one, "The Ghost Xperiment - Awakening", perhaps Vanden Plas' best album ever, the album ended on a cliffhanger, where during a séance, Gideon Grace, the main character, at last encounters the ghosts who have haunted him since his childhood. Based around the Phillip-Experiment, an authentic and credibly documented investigation of necromancy... literally, conjuring dead spirits, the German Prog Metal masters are capturing the horror and loneliness just perfectly on "Illumination".

Vanden Plas is like a fine wine, only better with time and the older they get. They do have a large back catalogue. Nonetheless. They've actually managed to record their two best albums during 2019 and 2020. That's quite astonishing considering the long history of the band, thus beating the odds of most acts sadly produce their best efforts early on in their career. It's quite the opposite on this rare occation and it's darn nice to greet them with a salute. "For years, I've felt driven by the idea of writing a ghost story that casts a different light on the genre, and ... at the end leaves the audience with a plausible explanation," author and Vanden Plas lead vocalist Andy Kuntz elucidates.

Indeed. The two part concept albums of Ghost Xperiment are by far their finest moments and should have them up there amongst the likes of Dream Theater, Symphony X, Seventh Wonder. Complex yet melodic material and compositions with a body of work that simply reeks 'larger than life' and not to mention 'spooky'. It's sharp edged tunesmith territory and Plas' cleverly structured songs and arrangements impress throughout the album. It's the ambitious effort and sort of cross between something old and something new to the genre of Prog Metal, leading to something quite familiar and ever so ghostly!!! Alea from the leading German medieval rock band Saltatio Mortis joins Kuntz for a duet on the bonus track "Krieg Kennt Keine Sieger", Snow White Blood singer Ulli Perhonen on "Black Waltz Death" and "Ghost Engineers" and the backing vocals team is made up of longtime musical colleagues including Oliver Hartmann from Avantasia and Herbie Langhans from Firewind. It's the album effort and everything from opener "When The World Is Falling Down" to the closing bonus track make sense. Final verdict: Not quite as "bombastic" as Part One, but still impressive and must have if you're into progressive metal. Vanden Plas at Facebook