ALIEN: "Into The Future" 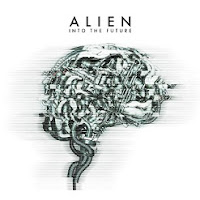 "Into The Future, No One Can Hear You Scream". Yeah. It's a different take on the classic poster tagline from the first ALIEN movie. But it perfectly captures the feel of the new release by the former AOR act. The crew of Jim Jidhed (vocals), Tony Borg (guitars) and Toby Tarrach (drums) are the sole survivors on the Swedish spaceship as they narrowly escaped the dodgy self-destruction sequence by the skin of their teeth, but unbeknownst to the world, the band of Alien had stowed away the AOR on their escape shuttle for a possible return trip to Earth. In other words. This record is taking the band from being merely an AOR band to more of a hard rock band with a heavier sound and more guitars.

Creating "Into The Future" was really a journey back to the days of being free in a musical way to experiment with arrangement, sounds, melodies and just having a blast while doing it. To be perfectly honest, they've gone back to their own roots and in this case it's Deep Purple and as the disoriented ALIEN slowly began regaining its senses, you can't help thinking it's also a tribute to the past as they're on a space Rock station many lightyears away from the rest of the human race. It's basically the Europe story, you need to seperate the two versions of the band (post and pre reunion) and you won't find anything remotely pink and fluffy 'ala their 1988 release. Jidhed is really pushing the boundaries and definitely not keeping it safe and boring on the album. Wave goodbye to Perry-ism and say hello to melodic metal and Biff Byford!? Seriously. It's in your face and not the soft spoken voice. Tony Borg, the passive-aggressive, six-string bender, and you'll find plenty of licks and tricks of highest order on this platter. Yep. There's Blackmore-moves, but also the rather modern metal approach to several riffs and passages.

The chugga-chugga riff and scream, start up "You Still Burn", and it's influenced? by 90's Purple at their most aggressive mode and not like their latest album. "Night Of Fire" show a little Celtic feel and the result may reek of Gary Moore and Saxon. "War Scars", display the metal side of Alien and it's once again Saxon in the back of my mind. Powerful drumming by Toby Tarrach and quite the shock to the system. "What Are We Fighting For" an upbeat number in the style of Purple, with a galloping groove, Hammond, and flashy guitar solo by Borg. The same goes for the title track which speak of and I quote, "we're movin' on and salute what's been done in the past", end quote. Indeed. They're looking into the future and have no interest whatsoever in playing the pure AOR of their first couple of albums. They wanted a heavier guitar sound and more heavier riffs and that's exactly what you'll hear on this album. There's a couple of catchy softies such as "Time Is Right", "Freedom Wind", "Fallin", however, Alien is no longer trapped inside the air ventilation system. -"Oh God! It's Moving Right Towards You! Move! Get Out Of There! Behind You! Move!". Final Verdict: It's Alien, Purple, Saxon, with a modern rock twist and not too shabby at all. Alien at Facebook