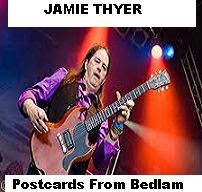 It's all Black N Blue? Take the vocalists name and remove the A from their guitarist a.k.a. Fake-Ace and perhaps you'll end up with music and guitar playing in the similar field and style? Nah. Not really. Reading the Postcards from Bedlam is sort of like communicated with the dead. You need to believe in all that mambo jumbo in the first place to truly appreciate the craziness? Never mind the daft introduction as Thyer (darn it, I typed ThAyer several times) and the Worried Men (I'd be worried too if they'd let me out of the asylum) are one of those never stop touring acts in the U.K. with more than 3000 performances all around the stages, pubs and festivals.

What to expect on their latest effort? Shocking solid "pub rock" and blues with their roots deeply buried in the mull of Peter Green, Walter Trout, The Kinks, Nine Below Zero, Thorogood, and Dr. Feelgood. Fun and expressive guitar playing by Thyer and I truly appreciate and enjoy his tone and amp sound. The 13-track album include a couple of covers such as "The Thrill Is Gone" (BB King), "The Witch Queen Of New Orleans" (Redbone). The majority of tracks are however originals and six of them co-written by Carole Warren whom also provided vocal talent. It's overall a nice mix of strong female vocals and the husky whiskey ditto of Thyer.

The guitar sound upfront in the mix (well doh!) and plenty of licks and tricks throughout the album. Jamie is quite the character with a special sense for playing the blues. Close your eyes during the instrumental "Nova" and you could easily find yourself in the middle of 'Still Crazy' and that's not too shabby considering the albums' title. It's proper U.K. guitar rock by a proper U.K. guitarist and his trusted backing band. I expect another postcard from his next visit at the funhouse...
theworriedmen.com
Posted by ROCKUNITED.COM at 5:00 PM