X-DRIVE: "Get Your Rock On" 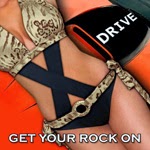 First impression. Cheesy artwork. Dodgy moniker. Average opener that remind us of a second rate Lynch Mob (the track: Love's a Bitch). What's there to like about X-Drive from L.A. of U.S. of A? Lo and behold, their debut album is quite the grower and there's plenty of fun moments and tracks to be found within these 12 tracks of late 80's hair-metal and slightly bluesy melodies. It's got a swagger 'ala Wild Horses meets Hardline meets Shark Island meets several other acts of the heydays of massive hairdos and wicked riffs.

X-Drive is the lovechild of lead guitarist Jeremy Brunner (long-time underground hero) and he's managed to land the excellent Keith St.John of Montrose and Burning Rain fame as lead vocalist. Add to this bassist James Lomenzo of White Lion and Megadeth and drummer Fred Fischer (Midline, Cure For The Fall) and get ready for the groove. It's hardly original nor ground breaking music. It's basically a rocking good time with no intention to save the world or experiment with sounds from the darkest depths of the sea. I do enjoy the tone of guitarist Brunner and it's been nicely produced by the late Led Zeppelin engineer Andy Johns. Indeed. It's all well-crafted melodies that draw influence from the bluesy as well the melodic side of hard rock.

There's however a minor problem that a majority of the tracks are steeped into the mid-tempo style and formula. They groove along just fine though and let's face it, sometimes you're just in a mood for the plain obvious and simple. Or like the band would say: 'Sometimes it's just a change of heart. There ain't nothing that you lack. Sometimes you know it ain't the stars and there ain't no goin back'. Huh? Anyhow. Nice stuff, but not always super catchy, if you get my point?
www.x-drivemusic.com
facebook
Posted by ROCKUNITED.COM at 8:05 PM