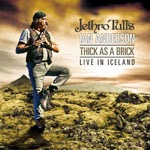 Oh Ian Boy! The flute, the flute is calling. Standing on one leg and playing that darn thing for 46 years is no child's play. Anderson is the right man for the job though. Some would say it's the very definition of Thick as a Brick? Let's not go there but rather back in time as Jethro Tull's Ian Anderson visited Iceland for concerts at the Harpa Hall during the early leg of the TAAB 1 and 2 tours of 2012 and 2013.

This is the first time Thick As A Brick and Thick As A Brick 2: Whatever Happened To Gerald Bostock? have been offered in a combined set, and the quality is sustained throughout both parts. On part:1 The instruments remains the same as in 1972 (the original release year of TAAB 1) with Hammond, Fender Jazz Bass Gibson Les Paul, etc. However, Anna Phoebe add some violin and Ryan O'Donnell add vocal content that Ian couldn't achieve while playing various instruments. It's one of those big 70's concept albums which featured one continuous track spread across two sides of an LP telling the story of a young boy named Gerald Bostock. Thus why CD one is merely one massive long track and probably not intended for the fan of 3 minute long songs.

This 2CD live release may just lack the feeling of upfront and raw live music. It's perhaps just too perfect and neat as everything shines like a burning star. I quite like it though and you can't blame the musicians for being sloppy or out of order. The whole prostate awareness banter and interlude is just way too long and out of context, even if the Icelandic audience might find it amusing? TAAB part 2 is clearly not quite up there with the first part, but several sections are great and the progressive folk-rock is dead on English and wacky fun. The 2CD set stand on its own, however, I'm sure that DVD or Blu-ray is the way to experience the show.
www.jethrotull.com
Posted by ROCKUNITED.COM at 6:23 PM