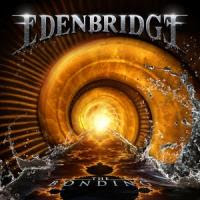 This was a much anticipated album and one which I hoped wouldn't disappoint like so many others which promised us the full orchestra treatment. Indeed, "The Bonding" holds the symphonic metal pieces together with the help from approx: 60 professional musicians from the Orchestra Klangvereinigung of Vienna. The arrangements and orchestral score by Lanvall takes on a dramatic figure/persona without going completely overboard and over-the-top. However, it's a grand part of the story and thus blending nicely together with the melodies of Edenbridge' and the soaring voice of Sabine Edelsbacher.

Did it disappoint? At first spin... slightly. Not exactly instantly catchy. You certainly need to spin this on several occasion to really get the full picture. I don't believe you're supposed to get the message at first spin anyhow. Too many layers and too much detail work, consisting of everything from the naughty french horn section to the rather impressive background vocals and choirs by dutch cult legend musician Robby Valentine (the bastard son of Freddy Mercury and Mozart).

The entire album becomes based around passion, emotion, and grief, where "Death Is Not The End" stand out as the winning concept. "Star-Crossed Dreamer" and "Far Out Of Reach", it's like if you're listening to Edenbridge' answer to one of those Dream Theatre semi-ballads of the early nineties. Actually, the lead guitar work of Lanvall (tone, amp sound) may at times remind you of John Petrucci. The epic closing title track as well as the duet between Sabine and Eric Martensson (Eclipse, and several other projects at Frontiers) culminates in pure symphonic metal mayhem. Melodic, bombastic, and very posh - the true definition of Edenbridge in the year of 2013. Highly Recommended.
http://www.edenbridge.org
facebook page
Posted by ROCKUNITED.COM at 6:13 PM