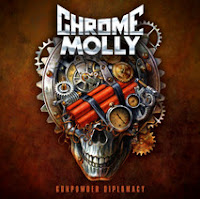 Leicester scores with a smashing header as well as the blast from the past? Sadly not football and the return of the prodigal son and local hero, Emile Heskey (2012/13, the season their team will finally make it back to premier league again? no?). 'Gunpowder Diplomacy" - the least likely hard rock comeback album as of lately? I'm not even sure if their relatives are too bothered in the end? Ouch... that's harsh!?

Chrome Molly, originally formed in 1982, this U.K. foursome melodic metal act from Leicester made their debut in 1984 (the single "You Said") and recorded three rather average albums between the years of 1986 to 1990 (You Can't Have It All, Stick it Out, Slaphead) before they vanished without a trace. Their 1988 release, "Angst", was the remixed compilation of the least mediocre material on the first two albums.

It's been 22, 23? years since their break-up, but the original members of Steve Hawkins (vocals), John Antcliffe (guitars), Nic Wastell (bass) truly believe there's a place in your heart for yet another obscure act of the past. Why not? God knows there's too many of them out there in cyberspace. One more surely won't hurt? Basic 'meat and potato' 80's (melodic) metal arrangements is thy name and not too complicated structure is thy game. What if you'd imagine the average effort by Wolfsbane (they were never great in my book) and the occasional superb track in the vein of UFO and HEAVY PETTIN??

I do indeed love the UFO vs. HEAVY PETTIN' guitar rock of "Stop Love" and "Short Sharp Shock", since it's frankly just a good time with killer riffs by Antcliffe and the really fun, catchy, sing-a-long choruses. I find myself shouting along at the top of my lungs to the words of 'I need a Short Sharp Shock. Knock me back to sanity. Just a Sharp Short Shock. Get me some sobriety'. Man, if only all of their songs could be this great. "All In My Mind", "Billion Dollar Heart Attack", "The Runner", and the vicious Wolfsbane/Priest/Accept sort of rock of the opening track, "Corporation Fear", are no doubt good stuff.

It's a grower though and the guitar work RAWKS throughout the album. Take one third of WOLFSBANE, UFO, and HEAVY PETTIN and end up with 99% CHROME MOLLY? Perhaps... not too shabby in the end.
www.chromemolly.com/
www.facebook.com/chromemollyuk/

Posted by ROCKUNITED.COM at 5:45 PM