ADLER: "Back From The Dead" 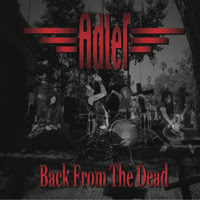 The second coming of the former Guns N Roses drummer Steven Adler, 'Back From The Dead'. Released late last year in the states. But unfortunately (since this is quite the smashing album), rock fans on the other side of the pond are still waiting for the Euro-version and the decent distribution. It's in the works though and their U.S. label people were kind enough to ship out a copy for review.

You all know the Adler story by now. Booted, drugs, strokes, more drugs, reality TV, rehab. Let's get down to the real business - the music. I constantly find myself humming and tapping along to the straight rock arrangements and melodies throughout the album. Slamming drums, screaming guitars, wicked bass-lines in the vein of Rachel Bolan, even though it's Jeff Pilson from Dokken at the four-string, and kick-azz material that has slightly more of a modern slant to it than expected.

Jacob Bunton from Lynam and Mars Electric fame handle the vocals as well being the main songwriter of the band. I can't recall him ever sounding this good before or coming up with such excellent material. Try to imagine the great old skool Skid Row, G N'R, and modern/punky/angry/catchy rock mix. In fact, if your ideal song(s) falls somwhere between the traditional sleaze and the catchiness of modern rock, then let me introduce you to one of your new favourite acts. It's the psycho stomp of the first two Skid Row albums, the bottom end of the Motley Crue S/T (Corabi), and the touch of catchy contemporary rock.

The (very) late 70's Steve Perry and Journey rock of "Your Diamonds" - yet another great surprise. Guest musicians such as Slash and John 5 (they both play on one track each) and the production by Jiff Pilson, makes this one of the coolest albums as of lately. Just don't expect to find that much of the Guns N Roses sound. Now, let's get Adler over here for the Summer Festivals in Europe. Highly Recommended.
http://www.adlerrocks.com
facebook page

Posted by ROCKUNITED.COM at 1:35 PM