THE DARKER MY HORIZON: "Seize The Day" 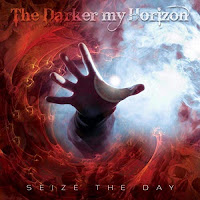 This is the third album from the hard working lads of The Darker My Horizon. Over the last five years they've gone from strength to strength, supported many name artists such as Nazareth and Geoff Tate’s Operation: Mindcrime and headlined some smaller-scaled festivals. They've achieved their status independently, which is very impressive.

"Seize The Day" follows their successful formula of mixing 80's styled melodic rock with modern rock. They've got their Nickelback'ish rockers like "Sleaze" and "Still Alive" which I frankly don't find  that interesting, but they also have a more melodic side which appeals to me more. Many of the album's songs are ballads or at least balladic, ranging from the more power-ballad styled songs like "Carpe Diem" and "On My Way" to understated, delicate ones such as "No Turning Back" with its' sparse instrumentation.

I was slightly disappointed in the first half of the album (all the "nickelrockers"), but thankfully the second half was much better. The "B-side" of this album has most of the better tracks, including the aforementioned "On My Way" and "No Turning Back". The album's highlight for me is track number 8, "Lies, Lies, Lies". It's a clever uptempo track with an absolutely majestic guitar hook. I'm talking about Bostonesque proportions here! "I Will Rise Again" is another fine track with great axemanship. The acoustic version of the ballad "Dear Olivia" closes the album, or maybe it's supposed to be a bonustrack, I don't know. The electric version of it was released on the band's previous album. I like it, and apparently the band likes it too, since they've released both versions of it as singles!

Posted by ROCKUNITED.COM at 1:49 PM