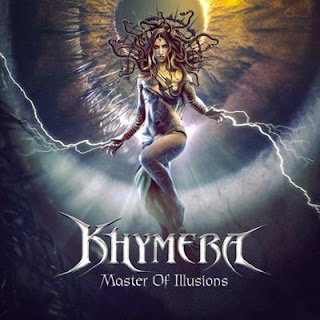 What once started out by Italian producer/musician Daniele Liverani and then Kansas singer Steve Walsh, has developed into a regular on/off melodic hardrock project by bassist and producer Dennis Ward (Pink Cream 69, Magnum). I never quite understood why they decided to keep the moniker? All the previous musicians are gone and it's a completely different sound and project? Anyhow. It's still Ward-Khymera and you can except the great production and pretty darn solid songwriting by Mister Pink Magnum. Indeed. 'Master of Illusions' may have the appearance of some kind of electrifed Goddess with a wacky taste for success. Even the album title may suggest the progressive outfit, and it's kind of alarming to find several riffs that are just a bit too clichéd to be worthy of full praise and the 21 guns salute.

On first play it's a little bit on the safe side. However, it's definitely a grower and as a rock band the line-up of Ward (vox/bass), Michael Klein (guitars), Eric Ragno (keyboards), Pete Newdeck (drums) are bloody excellent, but it would have been nice if they hadn't completely drenched their melodies in all the eighties goo and muck. The quick track by track. The opener "Walk Away" is actually one of the more headbanging tracks on the album. It's uptempo and catchy stuff with the memorizing keyboard attack by Ragno and it's all very pleasing to these pair of ears. "The First Time" gets the blood pumping and your poor ticker may skip a beat or two as you're up dancing on the tables and screaming along to the refrain. The title track goes through Fair Warning and Bon Jovi vibes while keeing it Ward-y. "The Sun Goes Down" is a dark (pun intended) moment on the record and not really something to write home about. "Paradise" may not be the place to spend your after life since it's a rather sappy ballad. "The Rhythm Of My Life" is the sunny and fun moment and the same goes for "Follow The Sun".

"Spending my time drinking Whiskey and Wine" is the rather dodgy line from "Father And Son". It's however a really great sentimental ballad that goes straight to the heart with a heartfelt refrain that goes "Heaven help me, stand beside me, said the father to the son". All songs are written by Ward with the exception of "After All This Time" which is the work of Michael Palace. Not his best work up to date and it may just lack a proper hook. "Victim Of Your Love", great verse(s) and the so-so refrain. The closer "Just Let It Happen" is one of the highlights with its sophisticated sound and arrangement. Sadly hidden away as the last track on the album? Final verdict: It's a nice listening experience and you simply can't go wrong here, if you enjoyed the previous work by Ward and Khymera.
Posted by Urban Wally Wallstrom (RockUnited.com) at 12:23 PM