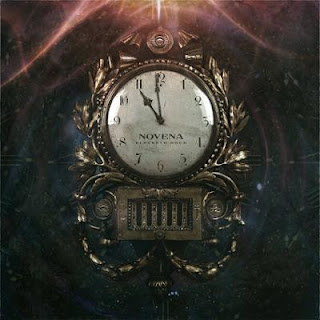 Prog-Rock from UK and Novena which include the line-up: Vocals by Ross Jennings' (Haken) and Gareth Mason's (Slice The Cake), guitars by Dan Thornton's (Ex-HAARP Machine, Ex-No Sin Evades His Gaze), drums: Cameron Spence's (Ravenface) and wicked bass-line from Moat Lowe's (Slugdge, Ex-NSEHG) and keyboard by Harrison White. Well. It's hardly Progressive Rock if you're stuck with a growler? That's a very posh attitude especially considering that I enjoy the Semblant release (see review elsewhere). It's not really the growls rather than the arrangements that gets on my nerves. I do find them to be eclectic and out of the box, but at the same time I struggle to find any purpose or direction since the melodies goes around and around in circles like a darn merry-go-round. You'd like to scream at them to sit down, stop smoking all that pot, focus, find your path, as they clearly got lost somewhere along the way.

And don't give me that crap that I clearly don't appreciate Prog, I friggin' love the genre with everything from ancient 70's stuff to modern era. These particular compositions? I find them to be too introspective and without any lasting memories or choruses. "Lucidity" is however the exception from the rule and something that's clearly worthy of your attention. It's sadly back to the annoying stuff with the following track "Corazón" though. It's like if they're throwing stuff at you just to see what sticks. Nothing, nothing sticks! According to the press-release, "every song has a solid and personal identity, with choruses that dare the listener to try and forget them". Blimey. They sure got it dead wrong this time. Forget them? I bloody well couldn't find them in the first place. I haven't been this put off by an Prog album for years and years. The absolutely best thing I can say about the Eleventh Hour? Check it for yourself. Great musicians. It's... different, odd, but oh-so incrediable b-o-r-i-n-g. It's like if they've invented a completely new genre, Snooze-Prog... Zzzz!
Posted by Urban Wally Wallstrom (RockUnited.com) at 12:50 PM