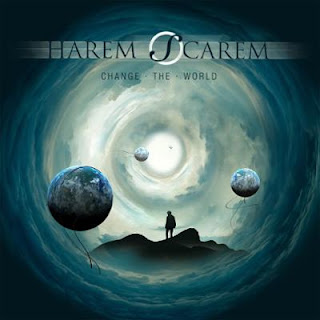 "We all want to find peace and harmony" - You and I are gonna Change The World? And Lesperance breaks out into the 80's UK rock-riff? (think: The Alarm, U2,). They haven't changed much since their previous record though and that's probably a good thing? Recall when they did Rubber and band-wagon material? It has worked against the Canadians because people seem to still want to talk about it. It's not something that I feel is all too relevant to what the boyos' are doing now and in the 2000's. As far as I'm concerned it's all in the past and... hang on a minute, 'The Death Of Me' might just be Rubber meets Moodswings? The slightly downtuned vibe? Ehem. Anyhow. It's catchy and fun stuff and the following track "Mother of Invention" goes through the Queen and My Chemical Romance transformation before setteling in at the Harem Scarem. The refrain is pure magic with it's smothering message, "Just let love shine into your heart, mind, body, and soul".

They might have been accused of being very 'solid' and it is no coincidence that their 15th album sounds similar to some of their previous ones. It's however not a case of three chords and keeping it boogie-woogie. For instance. Take something like "Riot In My Head" with its punky attitude and punch to the teeth. If Green Day decided to go melodic rock? Then again. Green Day are doing a lot of Power-Pop melodies. "No Me Without You" is like a trusty old ballad with a formula and arrangement that goes hand in hand with the world according to Harry Hess.

"Fire & Gasoline" smells like something Hess and Pete Lesperance just write and play spontaneously, and it simply just end up scary deadly and darn catchy. You'd expect the heavy artillery with a title such as "Swollowed By The Machine" and to my surprise, it's not the latest Marilyn Manson single, but a super melodic HS composition. The track listing is kind of weird and I would personally change a lot of the numbers. Final verdict: I don't truly believe they can "Change The World" with this record. They can however change your moodswings (ouch! lame-o) and brighten up your day. It's professional and well executed rock from one of the best and most trusted melodic rock acts in the business. Recommended .https://www.facebook.com/harem.scarem.band
Posted by Urban Wally Wallstrom (RockUnited.com) at 1:34 PM