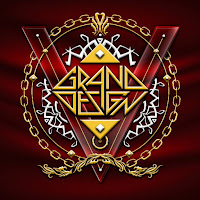 Album number five from this band, would you believe it? They started out as the biggest Def Leppard wannabes of all time, but somehow over the years they've matured into something else. It's still very Leppard-flavoured, but I can also see/hear the outlines of their own grand design.

"V" is a good album. I pretty much like all of the songs. Having said that, afte a dozen spins I still have trouble remembering some of them. Fun to listen to, but necessarily the kind of songs I find myself humming during the day.

The DL influence is very obvious in the guitar work, the harmonies and some of the melodies. Pelle Saether's distinctive voice doesn't really sound like that of Joe Elliott, his higher register is very unique and an acqured taste I'm sure. I'm still getting used to it, after all these years of listening to the band.

One track that's among my favourites is "The Warrior", originally recorded by Patty Smyth and Scandal. This early 80's hit gets re-designed and it works really well. Other standouts include the opener "Right Away", "I Dunno Wut To Say" (chek yer spelling! My spell checker is going crazy with these titles!) and "Guilty Of Luv In The 1st Degree". Then there are those mid-paced "hysterical animal" songs "Wut Are U Waiting For" (shouldn't that be "Wut R U Waiting 4"?) and "Take Me To Yer Heaven", good stuff too. As are the others, some of them might make you want to burn down something though.