WAYWARD SONS - "THE FUTURE AIN'T WHAT IT USED TO BE" 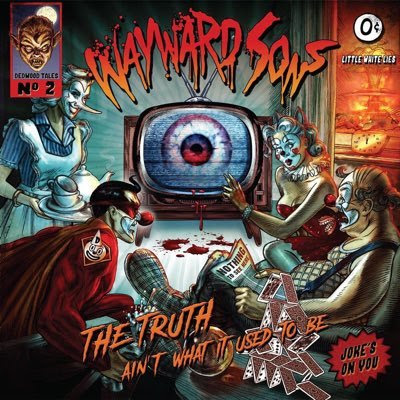 
One of the better albums from last year was Wayward Sons' debut release, which saw everyone;s favourite little angel Toby Jepson return to the forefront of the rock scene with a bang and a great new band alongside him. Naturally expectations are high for this second release, and I'm here to tell you that there's no need to riot (even if you wanna) because they've all been met with ease.

The album kicks off with the electrifying single 'Any Other Way', a full on melodic rock feast that has melody, harmony and solid brass balls all the way through. Jepson sounds as good as he ever did, and the band are as tight as to expected after a punishing schedule of touring, rehearsing and recording over the last 12 months or so. 'Black As Sin' follows a similar template, not giving the listener a chance to catch their breath as the hard hitting melodies and attitude whacks them about the face whilst laughing like a loon. Speaking of laughing like a loon, 'Jokes On You' is a bit more radio friendly (with a smidge of piano to help the flow) with a killer chorus that is immediately hummable. If you haven't yet, do check out the clown based videos the band are putting out as well- they're quite mental and lots of fun. Elsewhere, Toby gets angry in the monumentally brilliant track '(If Only God Was Real)', allowing the old scream to sneak out, whilst the title track has a slower, mesmerizing stomp to it and a chorus that won't quit.

The band have wisely allowed themselves to play with different tempos throughout the album, and whilst the big guitar stompers are plenty of fun it's nice to chill out with the lighter 'Little White Lies', 'Us Against the World' and 'Fade Away', a song which will have fans of 'Soapbox' creaming their spandex. Ah, yes... it's time for the Little Angels part of the review, which is sort of inevitable. Wayward Sons definitely bring to mind those Scarborough scamps plenty of times, and for me that's exactly what I was hoping for. Jepson's vocals make it pretty hard not to think of them, and the similar style of songwriting and playing just reinforce it. Let me put it this way, if this was a new Little Angels album fans would be ecstatic with the fact that they wouldn't have radically (your lover?) altered the sound. Ya get me?

In the end, 'The Truth Ain't What It Used To Be' is a terrific release. Twelve absolute blinders plus a sneaky bonus track, it's even better that the debut, and that's no easy task. If you've yet to check them out please get to YouTube and see what all the fuss is about. Believe me, you'll be converted. Possibly the best release of the year so far, Wayward Sons may not be original but by Harry they're fucking good so do yourself a favour and join the Wayward Army.