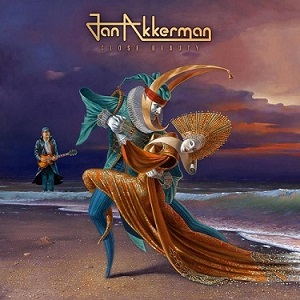 Hocus Pocus with Focus. There you go. That's pretty much all I know about Jan Akkerman. Not a whole lot to be honest. But I won't lie or pretend to know everything about each and every (hard) rock artists out there and certainly not when it's instrumental music (his solo outings). Do the google, you say? No. You do the google. It's sort of interesting to listen to 'Close Beauty' without any knowledge, if you know what I mean? You simply can't keep track of them all and Focus was before my time. No real excuse since I obviously do track back in time.

However. It's twelve compositions, acoustic, electric guitar, and overall varied works. According to Jan, "I've always been able to tell that none of my albums sound the same. Exploring new things is something that I'd always wanted to do. Harmonica player Toots Thielemans once told me: ‘your timing, that’s your signature, your autogram’. I consider ‘Close Beauty’ exactly like that. If you stand very close to a cow, you can’t tell it’s a cow, after all", end quote. Conclusion? It's a cow!?

He's obviously 'Dutch' from the Netherlands (Holland) and "Close Beauty", instrumental rock in its more classical sense, having a penchant for more snappy medievil influences and open land/soundscapes, than never-ending cycles of riffs held together by shredding and pace, Akkerman's compositions are progressive when it comes to updating the vast spectrum of instrumental music. Hard to categorize, the mood changes from sunny afternoons to not so sunny melancholy. The music is really diverse, so the different music channels have different structure and avenues to choose from. Some of the songs are in the vein of the classical masters, others are more fusion influenced, there's fingerpicking, as well as a few odd numbers of clarity and Spiritual Privacy.

The bottom line: Less widdly widdly diddly, and more in time with the current 'less is more' vogue, the compositions add a wicked sense of individuality to the album which channels the timing, harmonics, virtuosity of a great guitarist. It's the great album to listen to while reading a book and I mean that in the best possible way and sense. One thing's for sure. It's the art cover of the year, if not for the sneaky fishy 72 year old geezer in the background :-) facebook.com/JanAkkermanOfficial
Posted by Urban Wally Wallstrom (RockUnited.com) at 12:17 PM