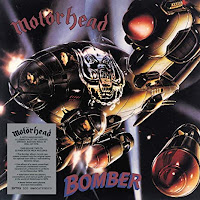 This is the 40th anniversary edition of the classic Motorhead album 'Bomber'; their third studio album was released on 27 October 1979, just 7 months after their 2nd album "Overkill" This again must have album featured classic Motorhead songs like: "Dead Men Tell No Tales", "Sweet Revenge", "Stone Dead Forever", "Bomber" and one of my personal Motorhead favourites "Lawman". Again all the 10 songs on "Bomber" were composed by the three original members:Kilmister, Clarke and Taylor; therefore all the tracks are full of the characteristic sound of that classic line up. So, there were some real killer songs on this album, however, the fans and the critics found the overall songs on Bomber not as good as those on Overkill. Still the album ranked number 397 in Rock Hard magazine's book of the 500 Greatest Rock & Metal albums of all time!

Again this anniversary edition comes with a live bonus CD, whch was recorded in Le Mans and the set list contained 18 tracks with a total playing time of almost 70 minutes! Live classic Motorhead songs like Overkill, Stay Clean, No Class, Metropolis, Lawman, Motorhead and Bomber are featured here and they rock like hell. Other highlights on this amazing live set are Limb From Limb, featuring a superb guitar solo by Clarke, a cover of the old time classic Train Kept A Rollin' and a dazzling version of Capricorn.

I probably repeat myself here, but again this is a must have Motorhead release, not only for the great heavy rock and roll music but also for the splendid booklet that comes along with it. Highly recommended, again, and as Lemmy said it more than once: "we're Motorhead and we're gonna kick your ass!!", and they certainly did, enjoy!!