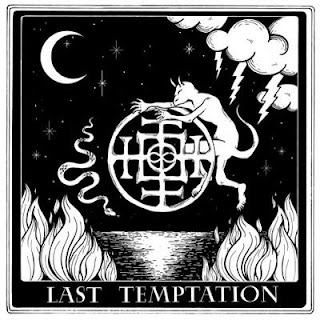 I actually feel sort of sorry for guitarist Peter Scheithauer (Killing Machine, Belladonna, Temple of Brutality) and vocalist Butcho Vukovic (Watcha, Showtime) as they release their debut album. They are the masterminds of the new band and project of Last Temptation yet the press release and not to mention sticker on the album cover mention only that the recordings were accompanied by Bob Daisley (Ozzy Osbourne, Gary Moore, Rainbow) on bass, Vinny Appice (Dio, Black Sabbath) on drums, and Don Airey on keyboards (Deep Purple, Rainbow, Ozzy) as they recorded their eponymous first album.

This record is decidedly old school in its execution and stands for classic 70's and 80's Metal, that is supposed to reminds on genre icons like Rainbow, Black Sabbath, Dio and Ozzy Osbourne. Well... hold your horses and keep your rabid rabbits and hungry hounds on the leash. It's never quite really that good and the compositions and arrangements (all by the dynamic duo of Scheithauer and Vukovic) are kind of samey and once you've noticed the refrain to one, you've pretty much heard them all. It doesn't help to repeat the words "Bring Your Light Out" a thousand times if you're sort of fed up the first time. The most Ozzy/Sabbath moment of "Blow a Fuse" and "Never Say Goodbye" might have the oldies going at least up until the refrain. The latter sounding more like Soundgarden in the late eighties, early nineties though and not bad at all.

The bottom line according to Scheithauer was "having that live feeling that seems to be missing with a lot of recordings these days. We'll go and rehearse in the studio, sometimes we'll hear something that would be a great take, and that’s a magical thing. What makes certain records magical is that the music is living and breathing; it’s organic, it's real, including the occasional mistakes (laughs)". Fair enough. It's organic, real, proper production, but never really exciting or fun. By the way. Guest musicians also include Rudy Sarzo, James Lomenzo, Stet Howland, etc. but why bother, since they don't fit the bill and classic rock genre?
Posted by Urban Wally Wallstrom (RockUnited.com) at 8:59 AM