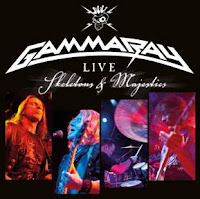 What if you're still not sure and/or convinced about Gamma Ray's leader Kai Hansen? You know, when he decided to soldier on as both guitarist AND lead vocalist of the band? You tend to forget that when the pumpkin heads struck a label deal in 1985 with leading metal outlet Noise, the very same person did indeed stand infront of the microphone and screamed his pumpkin head off on the debut mini-LP.

There's however no doubt that Helloween became the better outfit with Michael Kiske and I always thought that Ralf Scheepers did a great job fronting Gamma Ray. I'm not saying that Hansen is a rubbish singer, especially since he's not, but the snarling vocals gets on your nerves in the long run. The two disc set of, "Skeletons & Majesties Live", holds twenty tracks (the DVD another six, plus interviews, etc.) and it's frankly just a bit too much of the shriek and screech.

The concert, recorded at Z7, Pratteln/Switzerland in 2011, capture da Rrryzzz in their essence performing songs that are not very often included in their standard set-list, selected from their twenty years long history. It's the last shows they played with drummer Daniel Zimmermann and the brand new chapter awaits with the upcoming new studio album in 2013. You can say that Gamma Ray are at times peculiarly German, but for all the teutonic display, they're very much about songs and creating the sing-a-long schlager metal mood. Not nearly as often as the usual gig though. I believe there's a perfectly good reason to why several of these songs are not in their standard set-list.

The special guest appearance by Michael Kiske on the songs, "Time To Break Free" and "A While in Dreamland", gets the audience going. And the closing Helloween number, "Future World (feat. Kiske)", gets the biggest cheer of the evening. The bottomline: this live release - strickly intended to please the die-hard fan?
www.gammaray.org

Posted by ROCKUNITED.COM at 6:19 PM