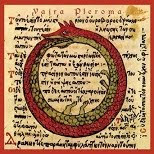 Vajra is basically the work of the multi-talanted singer and instrumentalist, Annamaria Pinna. She began playing flute and violin at young age and went on to study music at Julliard. Inspired by her self-imposed exile in India "Pleroma" is an exploration in paradox and weaving eastern themes with melodic, progressive, art-rock and alternative music. Blake Flemming (Mars Volta) on drums as well as other guest musicians plus that Grammy award winning Sylvia Massy (Tool, System Of A Down, Prince) co-produces and Tom Baker (Foo Fighter, NIN, Prince) mastered the record makes this a very professional and great sounding debut.

Can you trust the hype? Well, Vajra recently signed licensing agreements with The Discovery Network, MTV, Showtime and Bravo. The music is currently being played at 200 radio stations nationwide, syndicated radio shows, podcasts, and music websites. They performed two shows at SXSW and recently played to sold-out audiences at The Bowery Ballroom, The Mercury Lounge and The Bowery Electric in NYC. Filmmaker Jordan Stone are collaborating to create a visual psychological exploration to accompany the band's mysterious lullabies. You can pick up influences of everything from 80's acts such as All About Eve, Siouxsie And The Banshees, The Cure, to The Gathering, The Violet Hour, as well as old and new prog/art/indie rock.

Simply think of Vajra as something outside the box. That darn box is occuping the minds of many and most musicians anyhow. Perhaps it's time for a change, no? That may just be what a lot of musicians have to do today. Simply ignore the box and believe in themselves as songwriters? Surely some would complain about that as well? Simplicity rules? In many cases true, however, instant gratification due to using the same old formula as the rest is going to be around for only so long. Different thinking, different parts and arrangements, that's lasting material right there. Annamaria is definitely different (she also has a neurological condition called synesthesia where she attaches color and shape to sound) and her album is best described as intelligent alternative art/prog rock, yet by no means a perfect record. It's darn good and different though and here's looking forward to more in the future to come...
www.thevajratemple.com

Posted by ROCKUNITED.COM at 5:27 PM