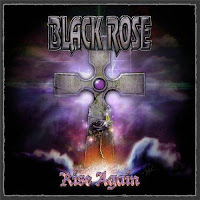 Black Rose, the Swedish band, not to be confused with the U.K. act or any other group using the same name. Originally formed back in 1990 and they recorded their debut album [Fortune Favours The Brave] in 1993 at the dodgy Danish label 'Bums'. A couple of mini-albums and a previous comeback attempt and album in the early 00's, the Swedes are now finally prepard to 'Rise Again'.

The present line-up include original members: Thomas Berg (guitars), and Haga brothers (Anders - bass) and Peter (drums). The band's new singer Peter Thederan sings in a slightly higher range than previous geezer but there's still a bit of Ulf Christiansson (Jerusalem) to be found within his lungs (aka husky or if you prefer barbwire vocals).

The song "Hunter" may remind you of 'Kill The King' and a dozen of other Ronnie James Dio performed numbers by Rainbow. Truth be told, the majority of tracks on 'Rise Again' will either have you thinking about a water downed version of Dio/Rainbow or Yngwie Malmsteen. Berg is a far cry from the technical masterminds of Blackmore and especially Malmsteen though and there should be no other comparison whatsoever really. The band performs very well together and the energy inherent of earlier releases hasn't deserted them. Black Rose feels like genuine musicians as they're performing the typical heavy metal of the eighties and the fretboard work of Berg is spot on noisy.

Posted by ROCKUNITED.COM at 6:34 PM