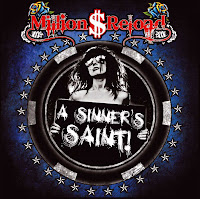 For some reason, I thought that this band was from Switzerland. They're not, they're from Ireland, but they surely have a very "Swiss" sound. You know, Krokus, early Gotthard, Shakra... Riff-driven hard rock with some nice melodies here and there. And of course, a gravel-throated vocalist.

Among the more riff-based, AC/DC-influenced and frankly not that exciting rockers, the more melodic songs stand out positively. "Bullets In The Sky" is the first one of them, a song that reminds me a bit of Great White and Tesla. The ballad "Broken" sounds like something that Cinderella could've topped the charts with in 1988, while "Wicked" has a definite Tyketto vibe.

The album's highlight for me is the catchy "Smoke 'N Mirrors". The song may be a distant cousin of Cinderella's "Shake Me", but it has enough identity to escape any "rip off" accusations.

All in all, a rather rockin' effort from this band, even though I wouldn't mind if the band attempted to add some an extra injection of melody to ALL of the songs on their next album.