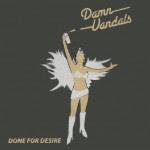 Damn Vandals - a bunch of holligans from The UK with a heavy rock/punk sound. Take the seventies attitude of acts such as Television and The Damned, add the odd Jesus and Mary Chain and The Cult, throw in some of the early nineties Britrock, and finish it all off with Frank Black, and you're sort of close yet nowhere near to the full picture. It's sinister and dark music with a tongue-in cheek feeling and agenda. What else to expect from song titles such as "Kids Want Guns" and "The Revenge Of Spider Toothy".

Don't go thinking it's all fun and games as the avant-garde firmly holds its grip around these geezers. "Done For Desire" is their debut album, following on from the acclaimed 'Beautiful Mind' EP, which had the UK press drooling including being made Shaun Keaveny's Record of The Week on his BBC6 music breakfast show. Very posh? It's BBC... six!? Oh my!

Though the tracks here don't attempt anything remotely out of ordinary late 70's tradition what will still appeal to some is the sheer energy and enthusiasm of the band. They're are basically Englishmen on holiday abroad and we all know what an awful mess and alarm they can and will cause. God bless the little monkeys as I'm sure their hearts are in the right place but the rest of their bodies are literally soaked in beer, fish n chips, crisps, black pudding, and deep fried mars-bars. I can't help thinking that the song "Beautiful Mind" is still their best track and I expected something even better or just as good on their long play. Some may say they're a water downed version of The Strokes? But that's really to simplify things. The Damn Vandals are more complex and dare I say wacky? Final verdict: Decent UK rock. But until the next album... have another go at the Television debut and learn from the masters.
www.damnvandals.co.uk

Posted by ROCKUNITED.COM at 7:14 PM