LA GUNS: "The Devil You Know" 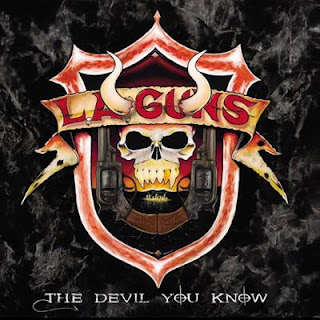 L.A. Guns and The Devil You Know. It's basically raw, you know, everything from song material, performances by the band members to the so-so production by Tracii Guns. And that's nicely put by the way. It's grit, dirt, filth, stench and goo, plus various other words that would normally make people turn around and walk away. It's basement horror and sheer terror. If you came here looking for goodie-goodies, rainbows and unicorns, keep dreaming sucker. Derranged and darn right wicked and mental Sleaze-Rock on the other hand? I guess it's you're lucky day! Do you feel lucky, punk?

It ain't pretty. It ain't clean. It certainly ain't soppy/sloppy and soft poser rock. It's frankly just ugly and aggressive glitter-gutter and the stuff you'll find at the bottom of a backalley in the LA scene. Gotta' love the way Phil Lewis sings the words "Loaded Bomb" as the Queen's English (he's from good old England and Girl, you know?) shines through and add yet another dimension to the material. The title track howls like a mental Adam Ant (to close to home?) on a night out with Kyuss. Darn right nasty. I'm not entirelly sure why I like it? But I do. It's bigger, louder, better. It's L.A. Guns on steriods. "Needle To The Bone", fun and catchy stuff. "Gone Honey" draw inspiration from MC5, Iggy, The Stooges, and Detroit. "Another Season In Hell", the much needed break from the asylum and the great ballad I may add.

The resulting mess is pure Sleaze/punk gore. They aren't about to use the LA Guns to completely kill rock n roll and that's as good as you'll get these days. The guns are blasting from the word go. It's a shame about the production though. It may lack the extra volume and sound. However. It's Punky/Sleazy stuff and these acts never sounded like Def Leppard's Hysteria or whatever. Final verdict: The Devil You Know, like a sucker punch on your birthday. It's a surprise - but not always nice. Deal with it... sucker! facebook.com/L.A.GunsOfficial
Posted by Urban Wally Wallstrom (RockUnited.com) at 9:16 AM