ARTLANTICA - “Across The Seven Seas” 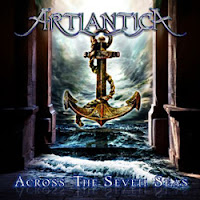 The first time I listened to this album (after having got over the ridiculously pretentious band name) I wasn’t too impressed. To me it felt like just another progressive power metal album, competent but nothing special. The thing is, you have to give albums a proper chance when reviewing them, so I gave it a few more spins, then a few more, then I just kept playing it for fun. First impressions? Fuck ‘em, don’t trust ‘em.

Although the name on the cover is Artlantica, this is another project by Swiss guitarist Roget Staffelbach, who has brought in the vocalist from his previous bands Angel Of Eden and Artension, the ever reliable John West (see also Royal Hunt and many more). Also on board is keyboard maestro Mistheria and power prog drum legend John Macaluso. All in all, this is a pretty solid line up with no weak link, and this shows in the resulting music.

What we have in ‘Across The Seven Seas’ is a true power prog album. Although there’s no epic, overlong songs, the entire album is held together by intricate, passionate instrumentals, switching effortlessly from powerful and fast to atmospheric, weaving themselves around West’s excellent vocals. A few time whilst listening to it people thought I had an Iron maiden album on, and it’s a fair comparison for some tracks as they gallop along with a very classic Maiden rhythm, although the solos are more, shall we say, widdly, and there is also, obviously, keyboard solos thrown in as well. There are some glorious guitar and keyboard parts throughout, but with Staffelbach and Mistheria on the same album that’s sort of a given.

Despite my initial reservation, I can heartily recommend Artlantica as a powerful, superior power metal bunch. Existing fans of the band members previous projects will find themselves in hog heaven, whilst others who like Stratovarius, Eden’s Curse or even old school Maiden should have a ball.